Looking to the Past to Solve Higher Education's Problems

I’m wrapping up Jeffrey J. Selingo’s College (Un)bound: The Future of Higher Education and What It Means for Students. Selingo is rather blunt in his appraisal of American higher education, calling it “broken.” He writes:

Like another American icon—the auto industry in Detroit—the higher education industry is beset by hubris, opposition to change, and resistance to accountability. (p. x)

Drawing parallels between Detroit and the higher education “industry” is an interesting idea worth exploring another time, especially given the long-standing description of universities as mini-cities or “cities of intellect.” For now, my focus is on the idea that higher education is broken and the solutions that have been offered to fix it.

Selingo isn’t unique in criticizing higher education. It’s become a bit of a fad in popular media. Within the last five years alone, writers have questioned the value of a college degree; decried inefficiencies in university spending; linked college to the maintenance of class inequalities; and extolled the virtues of new technologies, namely Massive Online Open Courses, in disrupting (and, therefore, saving) a system on the verge of self-destruction. Many of these writers reach a similar conclusion: there is urgent need to “reinvent,” “re-imagine,” “rethink,” or outright “revolutionize” higher education. 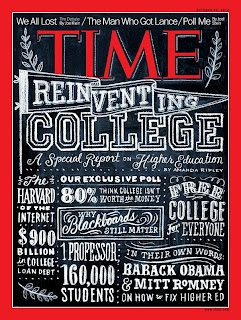 In response to this call to action, a plethora of people have suggested that higher education needs to develop “new business models” in the face of mounting financial challenges. For example, writing for Educause Review, Christine Flanagan argued that college and university leaders “should not invest dollars trying to advance the existing model,” but rather learn “the tools, skills, and experience to envision, test, and implement new business models” (p. 14). Unsurprisingly, many of the new models are derived from the experiences of corporations, including using new technologies to lower labor costs and boost productivity, diversifying revenue streams for long-term sustainability, and catering to consumer demand in order to best competitors.

What I find interesting is that there is a general acceptance that colleges and universities have been operating with some common, dysfunctional business plan in the first place. No one seems to register that viewing colleges and universities as businesses became widespread relatively recently in the history of higher education. And no one seems willing to believe that the issues higher education faces are linked to the diffusion and popularization of this view.

Corporatization and marketization have been happening in higher education since the late 1970s and early 1980s. We’ve experienced at least 30 years of creeping private industry money and management norms, and the result is not greater efficiency or effectiveness. The problems higher education confronts today are worse than in the 1970s. Ignoring this fact, a cadre of zealous reformers is trying to sell the idea that we need colleges and universities to be more business-like in their operations. In an era when evidence-driven reform is all the rage, why are more people not asking for evidence that corporate culture and business-derived solutions are working?

While I'm perhaps dangerously sympathetic to the idea that genius inventors are going to revolutionize learning and credentials, my inclination is toss out the window the idea that higher education needs a new business model. I believe we need to revive the view of colleges and universities as institutions. This is certainly not the first time higher education in America has experienced a major legitimacy crisis. It is still among the best systems in the world because it has proved capable of responding to challenging circumstances. At risk of sounding overly nostalgic, I think we need to look to the past for solutions to higher education’s current problems.

Now, obviously, there are some issues with the portrait of higher education’s past I painted above. Not everything about the past was so rosy—completion rates were low, discrimination was rampant. The demographic realities of today are very different from those of yesteryear. Some people will also be uncomfortable with using institution as a guiding concept. After all, institutions are seen as overly rationalized (or, in the eyes of some, thoroughly unrationalized) bureaucracies or sites of Foucauldian discipline. I like the idea of institution, rather than business, because it conveys simplicity and public support.

The point is that there is something to be said for seriously challenging the “new business model” rhetoric. We hesitate to call public high schools businesses because there is still a fleeting belief in the collective, public responsibility of providing education to young people. Why should higher education be so different?

The “innovators” will call me idealistic and risk-averse. They will shake their heads and announce, “The system must change!”

I agree. I’m just not convinced that business models can fix a system that is so “broken” precisely because we applied business models to non-profit and publicly-supported institutions.

Posted by Kevin R. McClure at 9:01 AM No comments: