The Dangers of Scholar Speak

Without giving it a second thought, I filled in the comment box to a friend’s Facebook post and hit “Enter.” And then I re-read what I typed, cocked my head to one side, and said, “Huh.” We’ve all been in this position, of course: wishing we would have given a comment a second thought or, better yet, just moved on with our lives and not commented. This situation, for me, felt slightly different in that the reason for my reflective pause was not that I wrote something ill-advised or incoherent. Rather, I was profoundly taken aback by how academic-y it sounded. And not in a good way.

Here I was, late on a Monday night, when most people are perhaps enjoying leisure time, debating with another scholar-in-training about whether the rhetoric of a politician was “neoliberal” or deserving of some other descriptor/concept. The fact that I spent my free time this way wasn’t really the issue. I’ve long realized my version of a “good time” can, at times, be baffling. Part of the reason I pursued a PhD program in the first place was because academic work stopped feeling like work a few years ago. It’s fun, almost a game, which is problematic in its own right.

What threw me for a loop about this seemingly innocuous event was that it brought together in a perfect storm the very worst of “scholar speak.” I’m including a few choice excerpts below, followed by a quick rundown of the main issues I noticed. This is more of a cathartic, self-deprecating exercise. I can’t claim to speak for anyone but myself. At the end of the exercise, it could be apparent that these issues are inevitable—part of the socialization process inherent to advanced study. However, it could be instructive for others, or start a conversation amongst those of us undertaking doctoral work to think about how we express ourselves.

“Well, I don't think it loses its meaning. I just think in the case of Turkey, in particular, you have to be prepared to contend with its contradictions. The Turkish approach to economic development under AKP has been undeniably neoliberal. However, political exigencies occasionally lead to strange state intervention in markets, which run contrary to the overall project (e.g., alcohol ban). The same thing happens in the US. But I think the tension is especially strong with a party attempting to reconcile capitalism and Islam.”

“I actually think we're on the same general page here, although I'm referring more to neoliberalization as a process, or as it actually exists, in the words of Jamie Peck, as opposed to a concept. I'm familiar with Tugal's book, but haven't read it. I would be curious to see the argument. I don't doubt that the AKP has found a way to make Islam and neoliberal capitalism compatible. Such is the evidence. My guess would be that there are still inherent tensions at play, which have to be managed, probably discursively. But this is the case in many places.”

Part of being an academic is having knowledge, competency, or expertise. For a variety of reasons that aren’t central to this conversation, scholars have become more specialized in their pursuit of expertise. We find what few remaining niches are left in our field, stake our claim, and start mining for “original” research that will set us apart from the other accomplished, smart people. This is partly why, despite having no pre-existing connection to Turkey, I exerted a great deal of effort learning about it. On some level, I do this because I think it’s important to know. Beyond learning, I also spend a lot of time demonstrating my knowledge because it’s expected of me and good for my career.

That’s the tricky thing about expertise: it must be enacted. In academe, I can’t simply say I’m an expert in education policy or economic development. I have to prove it, typically through writing journal articles, book chapters, monographs, or presenting at conferences. The reality is that only a very few pieces of research are all that important or necessary. We can’t argue that there is copious demand for academic articles, but that hasn’t slowed the steady increase in articles published each year. (See the graphic below from Altmetrics.) I suppose the logic is that, if I find it interesting, so must someone else. 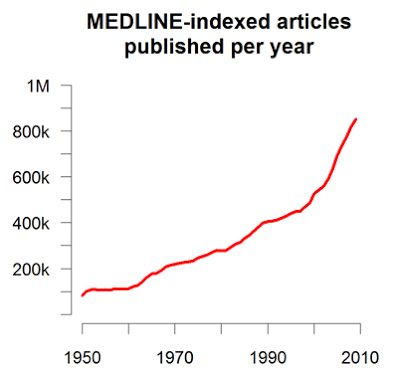 We young scholars especially go to great lengths to perform our expertise. In performing, we sometimes fall victim to replacing doubt or speculation with false conviction, or mask uncertainty with abstract argumentation. We often don’t have a full sense of what we are talking about, but admitting to not knowing something seems rather defeating. The danger is that we “play the part” and eventually reach comfort with pretense.

Part of the scholarly craft is making use of words to convey ideas. Choices must be made about which words to use, and how to arrange them in ways that achieve desired outcomes. The quality of these choices is used to evaluate our work. How strong is the argument? Is it convincingly presented? Clarity is not always a top concern here, as sometime we select words because they are en vogue or reflect that we are well read on some topic. Before long, sentences include a dozen clauses and are chock full of jargon like “dialectical” and “fiduciary.”

We see this all the time in journal article titles, which make use of strategic language to increase the likelihood of acceptance or readership. I can’t remember all of the times in which I’ve read half of an article, only to find that it says virtually nothing about sexy concepts that are used in the title. To be fair, many of us are grappling with complex social phenomena for which there is no clear language. We do the best we can and often recognize that our wording can be diversely interpreted. Sometimes we even invent entirely new words (I admit that this is a favorite pastime of mine). The danger is when our language becomes so esoteric that only a few others can translate what we’re saying.

In a PhD program, you read—a lot. You are expected to master certain bodies of research according to the demands of your discipline, program, and/or adviser. Over time, it’s easy to read some of the same scholars and ideas over and over again, to the point that they seem like truth. Enough people have cited this book or article, we reason, that it must be getting something right. The ideas are constantly at the forefront of our minds, making it easier to find evidence of them on a regular basis and marginalize alternatives.

Within the circles we run, we make recourse to these scholars and ideas to legitimate what we’re saying. This is why, for example, it’s almost impossible to escape Foucault or Bourdieu references in education research. Want to give your article greater currency? Throw in a Foucuauldian concept (my favorite is governmentality; see above for invented words). It’s not enough to simply use someone’s idea—we have to explicitly drop their name. Before long, academic work can feel a lot less like a creative enterprise and more like artful regurgitation. It’s important, of course, to pay homage to our intellectual forbears and give credit to others’ work. The danger is that our scholarship becomes stale and our writing reads like a list of names and concepts to “fit” within disciplinary currents.

My Facebook comment included many of these issues, but it probably wasn’t my worst offense. It was enough to cause me to seriously rethink the way I express myself. Perhaps more importantly, it raised questions about how pursue academic work with honesty, integrity, and authenticity. I’m not suggesting we dumb down our writing, and I understand some of these issues arise as a result of normal limitations. Consider it a call to critically assess whether, like me, you sometimes are guilty of “scholar speak” and how we might all change for the better.
Posted by Kevin R. McClure at 9:49 AM No comments: