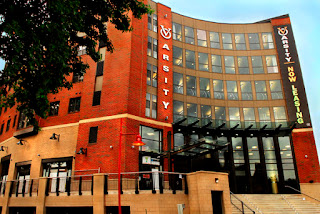 In a previous post, I described the Chipotle Effect, or the rise of a consumer logic among college students based on individualization and personalization. Part of what spurred this idea was the explosion of Chipotle-like eateries on and around my campus. Even as I write this, a new Mediterranean restaurant is opening a few blocks away, structured around the same assembly line idea: you pick your platform (e.g., bowl, sandwich, pita, etc.), pick your toppings, and hit the road.

On the one hand, it has been nice to see any development happening in a town that has been slow to recover from the 2007-2010 financial crises. Construction has resumed on a number of projects, and I have heard of others in the pipeline (get excited ::read with sarcasm:: for more hotels and luxury student apartments). On the other hand, one has to wonder at the trajectory of College Park’s development—what is the end game? Not all development, in my mind, is of equal value, and I, for one, have difficulty understanding the need for another burr-eatery when we still have no community-cohering coffee shop or bar showcasing local craft beer.

The concept of “smart growth,” from the field of urban planning, offers one way of evaluating development in College Park. The University of Maryland is actually home to the National Center for Smart Growth Research and Education. Indeed, the state of Maryland is considered the birthplace of the smart growth movement as a result of Governor Parris Glendening’s landmark executive order introducing the idea. The basic notion driving smart growth is that population growth and economic development are not inherently bad—they just need to be realized in a smart way. This means checking the environmental, economic, and social costs of suburban sprawl. In the poignant words of James W. Rouse:

Sprawl is inefficient. It stretches out the distances people must travel to work, to shop, to worship, to play. It fails to relate these activities in ways that strengthen each and, thus, it suppresses values that orderly relationships and concentration of uses would stimulate.

But worst of all, sprawl is inhuman. […] The vast formless sprawl of housing pierced by the unrelated spotting of schools, churches, stores, creates acreage so huge and irrational that they are out of scale with people.

So, if not sprawl, then what? According the Smart Growth Network, development imperatives should be:


With this list in mind, is College Park’s development smart? They’re getting a few things right. There are certainly a variety of transportation choices, although many of these options owe their existence to the town’s proximity to Washington, DC. Additionally, several of the development projects are trying to reuse existing buildings and promote walkability to public transportation and the seasonal farmer’s market. As for all of the other items on this list, College Park falls remarkably short. The new housing options are the same luxury student apartments. There have been concerns raised about a planned business incubator and research park affiliated with the university being built on vital meadowlands. And, finally, College Park seems to be selling itself to the highest development contractor and paying little attention to creating a distinctive sense of place.

The result is not smart growth, but rather the spread of what I would call concentrated campus-based consumption (CCC) areas. CCC areas arise in response to the college student consumer market. Some would argue that, in an era of rising tuition and struggling middle-class families, the presence of this market is questionable. I beg to differ. This market is thriving, and there appears to be no shortage of disposable income among at least a sizeable subset of today’s college student. This is one of the more interesting aspects of the conversation surrounding the mounting costs of higher education. Very few people have considered the extracurricular spending that has become a cultural norm—spending on housing, laptops, cell phones, clothing, coffee, and the other accoutrements of being a college student. 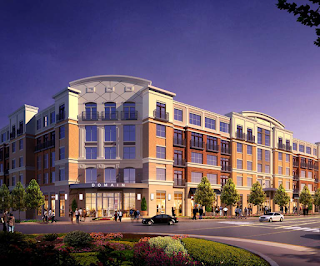 Business owners have capitalized on the existence of this thriving market. They are building mega-complexes that, while located within walking distance of campus, remind one of Rouse’s description of the sprawl that is “out of scale with people”. These complexes are multiple stories tall, housing thousands of students. They often feature a similar constellation of businesses: convenience stores, grab-and-go eateries, and perhaps a frozen yogurt place. A world is thus created for the average college student to orbit consisting largely of quick consumption sites. There is nothing unusual about a college student leaving their luxury apartment, buying a massive iced coffee in the morning, heading to class while talking on their iPhones, picking up a burrito, and sitting down to tap out a reading response on their MacBooks, before heading out to a bar for the night. Little thought goes into this routine beyond: “such is college life.”

Development in College Park hinges upon CCC areas. These are not designed with the community mind, but rather a large enough number of college students with enough disposable income to sustain a market. The fact that these areas depend upon college students is evinced by the great efforts expended to facilitate spending. They create pseudo-dining plans, or meal cards, so that college students can buy with a quick swipe. They pass out coupons at the student union, and advertise heavily in the student newspaper. Finally, it is worth noting that most of the businesses in CCC areas prepare for the quiet summer months—the offseason—when student consumers leave and their sales drop. It is in the summer months that it becomes clear that these areas are not built to strengthen the wider community.

The trajectory of College Park’s development is troubling. In lieu of constructing a distinctive college town with sustainable, community-minded development, we have rows upon rows of burr-eateries preying on a population of college students, many of whom have been encouraged to think of little beyond studying their way to upward mobility and buying their way to self-gratification. This is, admittedly, a rather narrow, pessimistic view of students. It is also somewhat self-condemning, as my routines sometimes resemble those of the students with whom I interact daily. Still, after six years of living and working among college students, I see unfortunately few counterexamples. As a firm believer in the idea that our behavior is shaped, in part, by the spaces we inhabit, I suggest here that we need smarter growth to help redirect the college student orbit, making possible smarter decision-making and lifestyles.
Posted by Kevin R. McClure at 9:45 AM No comments: